Carl (Karl) George Klibbe was born in the Pomeranian village of Ossecken on December 25th, 1852. He was originally a minister in the Lutheran Church.

Carl George Klibbe emigrated with his family to Scotland, and eventually from there to Australia.

Heinrich Friedrich Niemeyer was ordained as an “apostle” by “apostle” Friedrich Krebs and “apostle” F.W. Menkhoff in Germany on July 25th, 1886.

Carl George Klibbe and his family went via sailing ship from Australia to South Africa and en-route his son Herman (John) George was born at sea.

When they landed in Cape Town he bought a small-holding at Bellville and later moved and purchased a farm at Worcester because he depended on farming for his livelihood. His testimony was limited to the sparse population of German immigrants in Cape Town and Worcester because he could only speak German. When his missionary work bore no fruit he turned his attention to Berlin, 60km from East London.

In East London there were many German-speaking people and in the year 1892 a congregation emerged to become the first New Apostolic congregation in South Africa.

The congregation grew to 70 members who then built a chapel in Southernwood from their own means.

In 1901 a shoemaker by the name of Georg Heinrich Wilhelm Schlaphoff visited the congregation with his family. They were “sealed” by “apostle” Carl George Klibbe in 1902. On December 25th, 1902, “apostle” Carl George Klibbe ordained Georg Heinrich Wilhelm Schlaphoff as a “deacon” and commissioned him to move to Cape Town in another attempt to establish the New Apostolic Church there.

As a result of the financial losses, “apostle” Carl George Klibbe left East London and bought a farm in iMvani, a small railway siding 160km from East London.

In the meantime “deacon” Georg Heinrich Wilhelm Schlaphoff arrived in Cape Town in January 1903 and held services in his home at 41 Argyle Street in Woodstock. By April 10th, 1904, he was able to invite “apostle” Carl George Klibbe to “seal” new members in Cape Town. 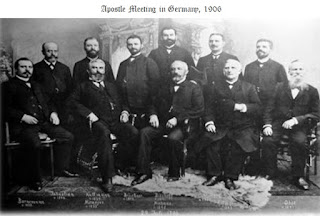 The home of “evangelist” Georg Heinrich Wilhelm Schlaphoff became too small and a hall in Station road, Claremont, was hired until a nearby plot of ground was purchased in Palmyra road. Here a church was built and dedicated by “apostle” Carl George Klibbe on June 4th, 1906.

Services were almost entirely held in German and the church was sometimes called the German Apostolic Church.

Two immigrants from Holland in 1904, Christiaan and Jacobus Kreunen, were “sealed” in Cape Town at the beginning of 1907. Christiaan Hendrik Kreunen, the eldest brother, was ordained as a “priest” to assist “evangelist” Georg Heinrich Wilhelm Schlaphoff in reaching the Dutch speaking residents in Cape Town.

Most of the people in iMvani also spoke Dutch or Cape Dutch. Because of this, “apostle” Carl George Klibbe requested “evangelist” Georg Heinrich Wilhelm Schlaphoff to send “priest” Christiaan Hendrik Kreunen to assist him in iMvani. Without further ado “priest” Christiaan Hendrik Kreunen and his family moved to Queenstown in 1907. He was later joined by his brother, Jacobus Kreunen.

In 1908 “apostle” Carl George Klibbe held a farewell service on his farm in iMvani and set out on his journey to go meet the “chief apostle”, following the example of “apostle” Heinrich Friedrich Niemeyer from Australia and the other “apostles”. He left by ship from Cape Town and in his absence, “evangelist” Georg Heinrich Wilhelm Schlaphoff cared for the church. It was many months later when a jubilant “apostle” Carl George Klibbe returned back to South Africa. 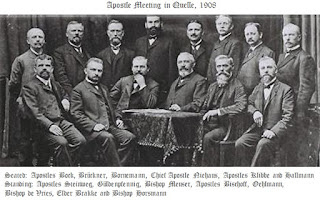 Unfortunately on his arrival back at his farm in iMvani he found that his crops had failed and many of his livestock had died. He had to sell his farm and was left destitute. Fortunately “priest” Christiaan Hendrik Kreunen offered him and his family accommodation in his home in Queenstown.

The Church was incorporated under Act 31 of 1909 (Transvaal) known as the New Apostolic Church (Africa) under the leadership of “apostle” Carl George Klibbe.

In the meantime “priest” Christiaan Hendrik Kreunen’s younger brother Jacobus got married and “apostle” Carl George Klibbe called him to move to Pretoria. Jacobus Kreunen moved to Pretoria in 1911. He was then ordained as “underdeacon” and then as “deacon”. He was later ordained as “priest” as his congregation grew and services were held in a hall in Schoeman street, Pretoria.

Back in Germany, the “chief apostle” Hermann Christoph Niehaus tried to strengthen his position and introduced new reforms whereof a conflict occurred. After a general “apostles” meeting in 1911, “apostle” Heinrich Friedrich Niemeyer from Australia was excommunicated.

Reasons for Apostolic Church of Queensland breakaway:
1) Establishment of the office of chief apostle
2) Personality cult that formed around the chief apostle


What happened in Germany and Australia seems to have had a knock-on effect on “apostle” Carl George Klibbe. He started returning all mail received from “chief apostle” Hermann Christoph Niehaus unopened, clearly indicating his severance from the “chief apostle” and “apostle unity”.

An invitation was extended to “district elder” Georg Heinrich Wilhelm Schlaphoff by “chief apostle” Hermann Christoph Niehaus to visit Germany. In 1913 “apostle” Carl George Klibbe was informed that he was excommunicated according to the Articles of Association of the New Apostolic Church (Africa) 1910.

On September 21st, 1913, Georg Heinrich Wilhelm Schlaphoff was ordained as an “apostle” while visiting in Germany.

On October 16th, 1913, Carl George Klibbe sent a letter to his “fourfold officers” in which he clearly stated that he believed that the Lord Jesus Christ will come again (Klibbe's letter).

In 1914 World War 1 was declared. German subjects in South Africa were interned and forced to leave their homes and face imprisonment in concentration camps. The war lasted until 1918.

There was confusion and bitter conflict because there appeared to be two “New Apostolic” churches, one led by “apostle” Georg Heinrich Wilhelm Schlaphoff and the other led by the excommunicated Carl George Klibbe.

According to the official Witwatersrand court settlement papers (pages 1 and 2):
“…Carl George Klibbe did in the year 1915 sever all connection with and declared its independence from the New Apostolic Church, whose headquarters is in Germany which is subject to the jurisdiction of the Apostle College and Apostle Unity and under the leadership of Herman Niehaus of Quelle, Germany…” (Court Case 432 of 1926).

Ernest Frederick Wilhelm Ninow was ordained by Carl George Klibbe before his death (May 21st, 1931) as “apostle” and successor, becoming chairman (leading apostle – primus inter pares) and leader of the OAC (Old Apostolic Church: History of the Western Cape District; Church History of the Old Apostolic Church for the Sunday School). This position was only abolished in 1984. Nowadays a chairman is elected for a period of two years only.

Is this a case of the pot calling the kettle black? What’s in a word anyway?
Maybe it’s six of one and half a dozen of the other?

You can also read:

*        Bans of prophetic gifts existed even before Niehaus as well as in the OAC. The end of the Catholic Apostolic Church's “prophetical” element was underlined by the adoption in 1843 of an elaborate new liturgy. During a meeting at Albury in 1860, the German “prophet” Heinrich Geyer called two “evangelists” to be “apostles”. After deliberation, the Catholic Apostolic Church “apostles” rejected this calling and affirmed that no further callings to the “apostolate” would be accepted. Then in the Hamburg Congregation, Heinrich Geyer the “prophet” had already called the coal dealer Johannes F.L. Güldner as an “apostle” in a private meeting four months before “apostle” Carl Wilhelm Louis Preuss' death. Carl Wilhelm Louis Preuss had refused to recognize this calling and, on his deathbed, designated “elder” Wichmann as his successor. In January, 1972 the “apostle” Robert Lombard was excommunicated from the OAC in part due to a dispute with the OAC apostolate concerning a revelation received by “apostle” Robert Lombard [Harry H. Martin, I tell you the truth, 2009, page 58].

****  The Second Coming as a future, literal event was accepted even before Niehaus. Edward Irving declared that there will be a great outpouring of the Holy Spirit and then Jesus would literally return. The main point of the Catholic Apostolic Church’s gospel was that the Church had deviated from its origins and only through restoring the “Universal Church” to its perfect state could the literal return of Christ be ensured. The Catholic Apostolic Church believed that the Holy Spirit was to prepare them for the literal return of Christ which they expected imminently. The liturgy of the New Apostolic Church was originally consistent with the liturgy of the Catholic Apostolic Church. In 1902 “elder” Julius Fischer came into conflict with “chief apostle” Friedrich Krebs regarding the future second coming of Jesus Christ. According to “elder” Julius Fischer, Jesus Christ had already returned in the re-established “apostle” office and according to him, there was no future second coming. As a result of his views, “chief apostle” Friedrich Krebs removed “elder” Julius Fischer from office. In the same way as Protestantism and Catholicism, the Second Coming of Christ as a future, literal event is at the forefront of the New Apostolic doctrine. The founding father of the OAC, “apostle” Klibbe also believed in the Second Coming as a future, literal event.

*****This is ironic as Carl George Klibbe was born and raised in Germany, could only speak German and his first congregations consisted mostly of German-speaking immigrants from Germany.