An OAC member wrote: “...I do not wait for Jesus anymore, because He lives, He live in me, If you are taking Jesus in your heart, why waiting for Him...” Sic 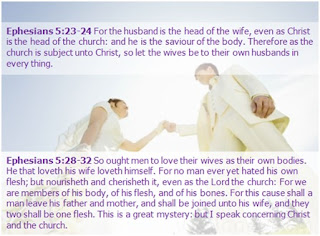 Whatever is done unto the least of His brethren is also done to Him (Matthew 25:31-46). Any parent that loves their children can understand this. Any older brother who feels protective over his other brothers can also relate. If someone does something to the smallest of your children or the smallest of your brothers, then it’s as if they’re also doing it to you, even if you’re not physically present. That’s the kind of love He has towards us, He was even prepared to die for us of which there is no greater love (John 15:12-15).

Please see my posts ‘The REAL Jesus’ and ‘Jesus, the ONLY Messiah’.

Luke 24:39 Behold my hands and my feet, that it is I myself: handle me, and see; for a spirit hath not flesh and bones, as ye see me have.

Hebrews 3:1-3 Wherefore, holy brethren, partakers of the heavenly calling, consider the Apostle and High Priest of our profession, Christ Jesus; Who was faithful to him that appointed him, as also Moses was faithful in all his house. For this man was counted worthy of more glory than Moses, inasmuch as he who hath builded the house hath more honour than the house.

Hebrews 7:20-28 And inasmuch as not without an oath he was made priest: (For those priests were made without an oath; but this with an oath by him that said unto him, The Lord sware and will not repent, Thou art a priest for ever after the order of Melchisedec:) By so much was Jesus made a surety of a better testament. And they truly were many priests, because they were not suffered to continue by reason of death: But this man, because he continueth ever, hath an unchangeable priesthood. Wherefore he is able also to save them to the uttermost that come unto God by him, seeing he ever liveth to make intercession for them. For such an high priest became us, who is holy, harmless, undefiled, separate from sinners, and made higher than the heavens; Who needeth not daily, as those high priests, to offer up sacrifice, first for his own sins, and then for the people's: for this he did once, when he offered up himself. For the law maketh men high priests which have infirmity; but the word of the oath, which was since the law, maketh the Son, who is consecrated for evermore.

Hebrews 10:10-14 By the which will we are sanctified through the offering of the body of Jesus Christ once for all. And every priest standeth daily ministering and offering oftentimes the same sacrifices, which can never take away sins: But this man, after he had offered one sacrifice for sins for ever, sat down on the right hand of God; From henceforth expecting till his enemies be made his footstool. For by one offering he hath perfected for ever them that are sanctified.

Old Nick therefore rejects the one sacrifice that Jesus made for ever. Only the precious blood of the Lamb can redeem us (1 Peter 1:18-19). We are all as an unclean thing, and all our righteousnesses are as filthy rags (Isaiah 64:6). The rags are filthy because our own works are stained by our own sins. By grace are we saved through faith which is the gift of God, nobody can boast about their own works (Ephesians 2:8-9).

Titus 3:3-7 For we ourselves also were sometimes foolish, disobedient, deceived, serving divers lusts and pleasures, living in malice and envy, hateful, and hating one another. But after that the kindness and love of God our Saviour toward man appeared, Not by works of righteousness which we have done, but according to his mercy he saved us, by the washing of regeneration, and renewing of the Holy Ghost; Which he shed on us abundantly through Jesus Christ our Saviour; That being justified by his grace, we should be made heirs according to the hope of eternal life.

Jesus offered Himself without spot to God to purge our conscience from dead works to serve the living God (Hebrews 9:12-14).