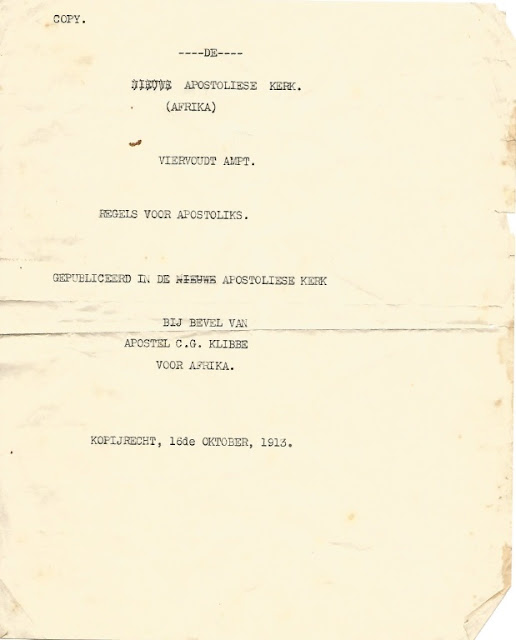 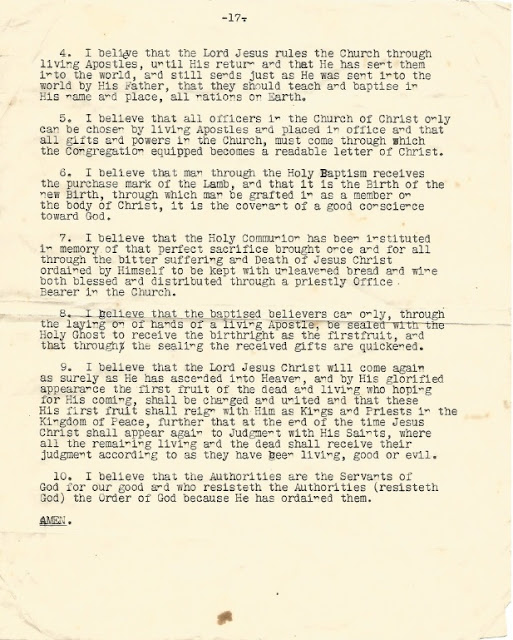 Carl George Klibbe wrote on October 16th, 1913: “...4. I believe that the Lord Jesus rules the Church through living Apostles, until His return and that He has sent them into the world, and still sends just as He was sent into the world by His Father, that they should teach and baptise in His name and place, all nations on Earth...”

“…9. I believe that the Lord Jesus Christ will come again as surely as He has ascended into Heaven, and by His glorified appearance the first fruit of the dead and living who hoping for His coming, shall be changed and united and that these His first fruit shall reign with Him as Kings and Priests in the Kingdom of Peace, further that at the end of the time Jesus Christ shall appear again to Judgment with His Saints, where all the remaining living and the dead shall receive their judgment according to as they have been living, good or evil…”

There’s nothing strange or unexpected about these articles of faith as disputed by an anonymous OAC member. Carl George Klibbe was sent to South Africa to establish the New Apostolic Church in 1889 and was called to be an “apostle” by the “Apostle College” in Europe in 1893. The church was incorporated under Act 31 of 1909 (Transvaal) known as the New Apostolic Church (Africa) under the leadership of “apostle” Carl George Klibbe.

Even today, the NAC articles of faith are almost identical to those typed in the 1913 letter.

The Hersteld Apostolische Zendingkerk and the Apostolic Church of Queensland (where Klibbe was “sealed”) with the same Irving “roots” as the NAC and OAC, also believe that Jesus Christ will come again.

Contrary to popular belief by OAC members, their founding father, “apostle” Carl George Klibbe literally believed that the Lord Jesus Christ will come again. The letter above stands in stark contrast to what’s written in the OAC catechism.

Catechism of the Old Apostolic Church of Africa…Part 2; Question 27 (pages 62-63):
“Has Christ already come, or do we still expect him?” (Sic)
“Ans. (a) Because the world expects that Christ will come on a natural cloud, they still look forward to his coming. From Matt. 16 v. 28, it is however clear, that Christ must already have come…”
“Ans. (b) From 2 Tim. 4 v. 7-8 it is clear that Christ must already have come during Apostle Paul’s life on earth…”
“Ans. (c) For us Christ has come, and we see Him, because it is revealed to us through the Holy Spirit and is our life…”

Catechism of the Old Apostolic Church of Africa…Part 2; Question 31 (page 65):
“On which clouds will Christ appear?”
“Ans. We must not confuse these clouds with natural clouds... It is the cloud of witnesses… It is the same cloud under which the flock of God was led out of Egypt…”

A woman on an OAC WhatsApp group dared to mention that Jesus would be coming back and she was taken to task as follows:

OAC Admin member #...9345 sent a picture of a man walking towards an open manhole.

OAC member #...8630 replied with a voice note saying this lady is crazy for having the nerve of sharing her uncalled for statement that Jesus is coming back and ended the note by calling her a disgrace.

OAC Admin member #...6600 replied with a voice note saying that the group is for sheep and that the lady is a goat who doesn’t know who Jesus Christ is by daring to mention that Jesus will return...”

OAC member #...9708 wrote: “...Kahle kahle [That’s fine] who is this person. Send this person back to the Deacon n umzalwane nodade [brother and sister] n learn again... I stand with Nkosi [Lord] yam asking the question “Are we really all apostles or people u just add anyone in this group” thr is no Jesus coming back he is already with is Acts 1...”

OAC member #...8630 wrote: “...I think he or she realised now that is in the incorrect group now let’s leave him or her will remove himself now...”

Thankfully this woman then left this Jesus hating group.

False apostles and false prophets cannot forge or counterfeit the coming of the Son of man, the only way they can try is by attempting to deceive people with false interpretations. Jesus warns us not to follow them because they will say “Lo here” and then try convincing people that they (false prophets and false churches) are Christ.

Matthew 24:23-28 Then if any man shall say unto you, Lo, here is Christ, or there; believe it not. For there shall arise false Christs, and false prophets, and shall shew great signs and wonders; insomuch that, if it were possible, they shall deceive the very elect. Behold, I have told you before. Wherefore if they shall say unto you, Behold, he is in the desert; go not forth: behold, he is in the secret chambers; believe it not. For as the lightning cometh out of the east, and shineth even unto the west; so shall also the coming of the Son of man be. For wheresoever the carcase is, there will the eagles be gathered together.

To those that are sincerely seeking the truth, there is good news; your soul salvation is not dependent on some man-made organization:

John 3:16-21 For God so loved the world, that he gave his only begotten Son, that whosoever believeth in him should not perish, but have everlasting life. For God sent not his Son into the world to condemn the world; but that the world through him might be saved. He that believeth on him is not condemned: but he that believeth not is condemned already, because he hath not believed in the name of the only begotten Son of God. And this is the condemnation, that light is come into the world, and men loved darkness rather than light, because their deeds were evil. For every one that doeth evil hateth the light, neither cometh to the light, lest his deeds should be reproved. But he that doeth truth cometh to the light, that his deeds may be made manifest, that they are wrought in God.

There is only one REAL Jesus and He is the ONLY Messiah.